Yesterday (Monday NZT) was VERY exciting. There were two fire engines, several firefighters and a couple of policemen across the street from our house. Our road (which is a reasonably busy road) was closed off. Some of our neighbours across the road and a few houses down were trapped in their house for over half the morning... why? 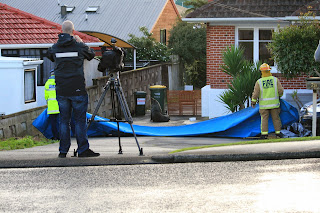 Well, because a fur seal had wandered up from the estuary and started sunbathing in front of their front door! This is incredibly unusual because the estuary down the road from us is quite far from the ocean.
Miss H arrived at the scene while the firefighters and police were still working out what exactly to do and who to call. So she was able to get as close as the cameraman in the above picture. 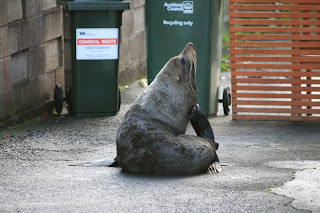 She took this coolio picture. Then sent it into the NZ Herald - and guess what? They used it, not only on their website... 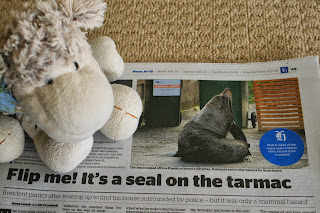 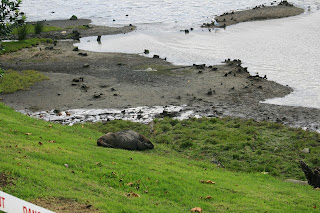 Later on that morning the firefighters and police used fences and wooden boards to get the seal back to the estuary, and hoped that he would then go back to the sea on the high tide (around 4 p.m.). The Boss (who had been at work during all the excitement) went out in the pouring rain and driving wind at 7:30 to check if the seal was still there - unfortunately he was.
But the excitement didn't end there! At 3 a.m. today (Tuesday NZT) the seal was spotted at the car wash which is located around the road a bit and behind the house he was found at yesterday. Department of Conservation and the Auckland Zoo have now taken him to a secluded beach about 30 minutes away. 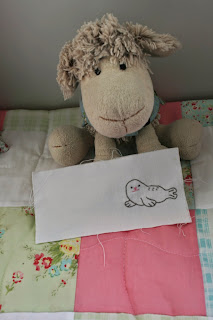 With all the seal excitement Miss H just HAD to stitch up a cute seal. He will be used as a quilt label one day. ﻿ 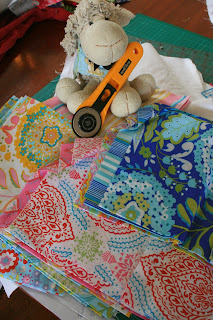 The Mother has al these lovely fabrics she is going to use in her next quilt. She just hasn't gotten around to cutting them up yet... so I said I would cut them for her... I can't see why she didn't want me to! 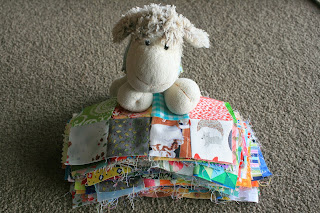