Every Friday the Mother goes to her friend's house, the Iron Maiden, to do some quilting. It all started many years ago when the Iron Maiden wanted to learn how to quilt, so The Mother and Aunty M - who now lives in Canada - started their own little quilting group with her. Several weeks ago Miss H and the Iron Maiden's daughter, Jazi-G, hatched a plan to crash their parents quilting night. Jazi-G had never used a sewing machine before but wanted to sew a t-shirt dress. The Mother suggested they try something easier first - a pillowcase! So Miss H and Jazi-G sewed a pillowcase each. (They did make t-shirt dresses afterwards - with lots of help from Miss H's Aunty S, who used to be a seamstress - without her it would have been a disaster because the fabric was REALLY REALLY stretchy!) 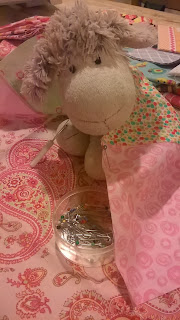 I helped Jazi-G pin her fabric together. 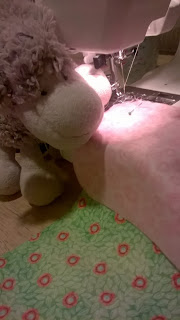 I taught Jazi-G how to use the sewing machine - unfortunately she didn't think I was a good teacher.

Thankfully Miss H and the Mother were good teachers. 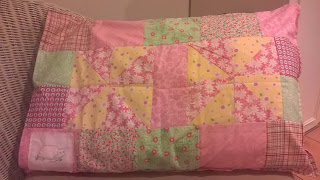 This is Jazi-G's completed pillowcase. 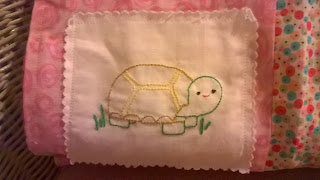 Miss H did a cute little turtle stitchery for her and Jazi-G named him Steven. 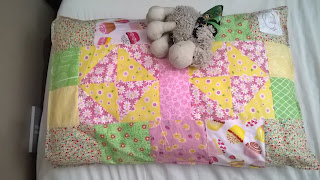 This is Miss H's completed pillow. 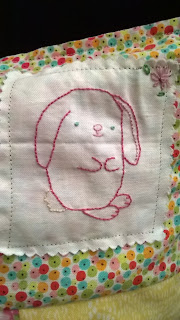 She stitched a lovely pink bunny for her pillow.